Russia may suffer default again like it did in 1998 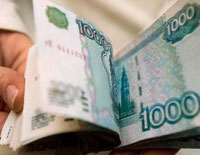 Russia may suffer default again like it did in 1998

Could they default again on billions of dollars in debt like they did in 1998?

On top of all of this, just to add insult to injury, their currency (the ruble) is crumbling at the same time. Ouch! Take a look at its chart below. You will be looking at the USD/RUB currency pair. So as the ruble falls, it causes the USD/RUB pair to go parabolic. The dollar is simply crushing the ruble as the ruble is devalued more by each passing day!

Why is Russia hurting so badly now, when they were doing so well just a year ago?!

So why is all of this happening? Well, Russia is the world’s biggest supplier of energy, especially oil and natural gas. Both of these have had such “demand destruction” that it has crippled their markets as the profit margins are all but gone now!

This “crash” in commodity prices has caused traders and investors alike to lose confidence in their stocks (which as dropped 18% this year on the RTS index) and their currency.

When money comes from abroad, it exchanges first into rubles then buys into their stocks. If both are coming down, then they are losing on both fronts (currency losses through the diminishing exchange rate as well as stock depreciation).

This has caused a “chain reaction” that keeps looping around. The ruble loses some value so investors cash out of their stocks and repatriate their money home. When other investors see the stocks drop, they cash out and repatriate money home also while further devalues the ruble as rubles are sold off and their home currencies are bought once again.

On top of this vicious cycle that’s been going on, Russia’s balance sheet is also eroding. Here’s why. The government (through their central bank) has been attempting to defend the currency and slow down its descent. However, it has literally cost them one third of the central bank’s reserves to do this. That’s huge.

In an effort to preserve the remainder of their reserves, the central bank raised interest rates on one day and seven day repurchase auctions to 11% in a bid to deter banks from borrowing funds to speculate against the ruble. The central bank is also limiting currency swaps to 5 billion rubles a day. Currency swaps allow traders to bet on an exchange rate without having to sell the currency up front.

However, there’s even more pain getting added on here. Today, Fitch lowered Russia’s debt rating to BBB and maintained that they have a negative outlook on Russia. This will cause their borrowing costs to climb now even further.

Click here to read the full text of article.