US economic policy may lead to confrontation with China 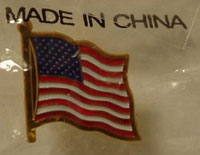 US economic policy may lead to confrontation with China

Barack Obama is on a risky path toward further confrontation with the Chinese. As his massive economic stimulus package makes its way though Congress, Uncle Sam's biggest trading partners are warning that we face a spiral of protectionist policies.

The House-approved version includes a "Buy American" provision that generally prohibits the purchase of foreign iron and steel for any infrastructure projects in the bill. Trade officials in Canada and Europe have already voiced concern.While it may not hit the Chinese economy directly, the provision has the potential to stir up a nationalistic backlash among government officials in Beijing.

China's fragile social compact might be shaken by the experience of economic hard times for the first time in the reform period started over thirty years ago. Kenneth G. Lieberthal, visiting fellow at the Brookings Institution, warns that the Obama administration may take a tougher line with China, according to the NY Times. "The Chinese are probably one of the few people in the world who were sorry to see President Bush go, and are nervous about his successor."

Obama is testing an already shaky bilateral relationship. The new president committed a gaffe last week by allowing his nominee for Treasury Secretary, Timothy Geithner, to say the administration "believes that China is manipulating its currency." Beijing reacted angrily.

As Chinese exports decline and millions of migrants are facing unemployment, Beijing is implementing a "me-first" trade strategy as well. The current response from Chinese regulators suggests that there will be a qualified return to the export led growth model. Western legal experts in China are predicting greater support for low tech, high-employment manufacturing and more incentives for pure export manufacturing.

The impact of international trade imbalances seems to be of little political concern, they say. Their aim: higher trade deficits for the US in exchange for greater social stability in China. "It is no surprise there is increasing talk that the incoming Obama administration will focus its trade spotlight on China," wrote Derek Scissors of the Heritage Foundation in Washington. "As it is usually the president who restrains Congress when protectionist sentiment strengthens, the storm clouds are plainly thickening."

In our global economy, what does "buy American" actually mean? With supply chains spread the world over, it is not as simple as it was in the 1980's when "Buy American, it could be your job" was the American industry's response to Japanese imports. Today, the "Made in China" label means many American companies, and their stock investors, benefit as well.

American consumers benefit by buying cheap Chinese imports. In November, The American reported: The Broda-Romalis paper, "Inequality and Prices: Does China Benefit the Poor in America?," shows that from 1994 to 2005, much of the increase in U.S. income inequality was actually offset by a decline in the price index of the goods that poorer households consume. Inflation for the richest 10 percent of U.S. households, which tend to spend more on services, was 6 percent higher than inflation for the poorest 10 percent, which tend to spend more on nondurable goods, the type of goods often imported from China and sold at Wal-Mart.

Broda and Romalis found that in the sectors where Chinese imports have increased the most (especially nondurable goods such as canned food and clothing), prices have fallen dramatically. They estimate that about one-third of the price decline for the poor is directly associated with rising imports from China. "In the sectors where there is no Chinese presence," Broda says, "inflation has been more than 20 percent. In the '60s, all the talk was about trying to win the war against poverty," he adds. "The bottom line with our study is that we may have won the war against poverty without even noticing it. Here we have Congress debating why the poor in America haven't been able to grasp the great economic growth we've seen in the last 30 years. 'It's been only concentrated in the top 1 percent,' they say. And, absolutely, that segment has grown a lot. But that doesn't mean that the poor haven't been able to access part of that progress."