Supermarkets may benefit from this recession

After a lengthy period of losing market share to restaurants, supermarket companies appear to be well-positioned to take it back. 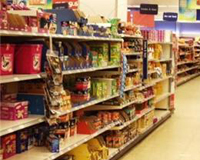 Supermarkets may benefit from this recession

Between 1960 and 2006, the rise of dual-income households in North America (and the time constraints inherent therein with both parents working) saw what analysts call the 'food-away-from-home' category climb to 39% of consumption — a rise of 20 percentage points.

We call it dining out, but needless to say, restaurants have steadily eaten into grocery store sales.

Once you've recovered from the abhorrent pun, we'll explore a smorgasbord of factors as to why analysts believe a structural shift is taking place among consumers away from restaurants back to supermarkets, and how your portfolio can gain from it.

First, the wealth effect is in full flight in both the short-term and long range.

The long-view factor is that womens' participation in the workforce is flattening, meaning "aspirational bingeing may recede and supermarkets could regain 200 basis points of share by 2018," say analysts at Goldman Sachs.

That's not the only demographical support favouring grocery stores.

As boomers age and incomes fall, so will their appetite for dining out. According to Goldman Sachs, the oldest consumer age bracket (65-74) possesses the lowest 'food-away-from-home' market share.

Another factor is food inflation, which has continued to tick upward in recent months despite the economic slowdown.

It's resulted in higher menu prices, according to a separate note from Citigroup Global Markets' analyst Greg Badishkanian. The rise in entree prices "combined with a weakening economy continues to drive consumers out of restaurants and into grocery stores."

In the short-run, private label producers that provide supermarket companies with unbranded or store-brand products will benefit the most as more companies move to offer more affordable food and drink.

Cott Corp. is a good example in Canada. Indeed, the beverage company's share price has doubled since early October as a clearer picture of the fine mess the economy is in was emerging.