Shanghai Center to become one of world’s highest skyscrapers

The construction of The Shanghai Center began in China November 29. The supertall skyscraper will become China’s highest building, the nation’s People.com reports. 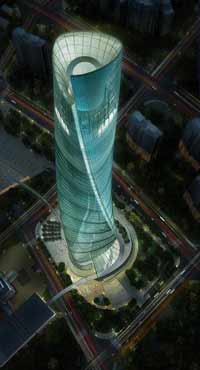 Shanghai Center to become one of world’s highest skyscrapers

The new gigantic tower will rise 632 meters up in the sky in the Pudong District of Shanghai. The skyscraper will be complete in 2014. The project is evaluated at 14.8 billion yuans, or about $2.17 billion.

There are two supertall skyscrapers in Shanghai’s Pudong already – 420.5 and 492 meters respectively.

Designed by Gensler, an American firm, the new landmark will twist as it rises and be surrounded by an outer glass wall, China’s Xinhua news agency reports.

"The building is designed to be environmental friendly," said Wang Wei, the director of the Engineering Center for Green Construction, Ministry of Construction.

The design by Gensler termed "Dragon" was chosen from many candidates in June. The 128-storeyed tower will feature nine gardens between the main building and the glass wall. A public park will also be in the building. It will be the tallest building in China and one of the tallest buildings in the world.

The tower will be organised as nine cylindrical buildings stacked atop each other, enclosed by the glass façade's inner layer. Between that and the outer layer, which twists as it rises, nine indoor gardens at different levels will provide public space for Shanghai residents. Both layers of the façade will be transparent, and retail and event spaces will be provided at the tower's base. The tower will feature the world's highest non-enclosed observation deck.

The tower's Director of Design, Marshall Strabala of Gensler, told E-Architect.co.uk architectural news website that Shanghai Tower will represent "China's dynamic future." "It will be an impressive building where China looks ahead to both the future of this bustling and ever-changing metropolis, but also to the future of the dynamic Chinese spirit. There will be no other such unique and well-conceived tower in the world," said Strabala.

It is worthy of note that the jungles of skyscrapers in Shanghai may result in the soil settlement on the entire territory of the city, Chinese scientists say.

The problem of flooding has always been one of the most serious problems for Shanghai. Nowadays, when the construction density in the city is about to reach the critical level, one should not exclude a possibility for the ground to settle. As a result , Shanghai may be flooded .

Shanghai normally pumps water and uses it in technical needs due to the high industrialization of the city. This method has recently been put into question.