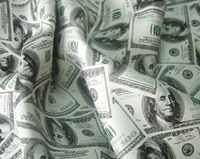 Defenders of the current economic policy of the Bush administration are now surfacing. Apparently, enough concern has been raised to cause a need to defend the status quo. There are two arguments for not changing policy at the present time. First, there is the argument that the value of the dollar has bottomed out along with signs that there could be an upturn. The second argument is that the United States is still too important in the world for the dollar to have to play by the same rules as all other nations. We will present these two defenses in turn.

The argument for the strengthening of the dollar is the growing attention that has been given to the weakness in the dollar over the past six years or so. Some analysts have discerned such concern being expressed in recent speeches of Ben Bernanke. The feeling is that the ‘balance is shifting’ from the emphasis on financial market crisis to greater emphasis being placed on what has been happening in the foreign exchange markets. Just the added attention on the foreign exchange market has given people hope.

Another factor in this glimpse of optimism is what is happening in Europe. Last Thursday, the Bank of England and the European Central Bank left their interest rates where they were. The concern expressed by these leaders is with inflation and they, the leaders of these banks, stated that ‘their mandate’ is to maintain price stability within their domains. Given the recent rise in the price of oil and other commodities, greater concern is being expressed that inflation could get out-of-hand and the need right now is to keep a lid on price pressures. The underlying theme is that these central banks will do what they have to do in order to fight these inflationary trends, but this could cause an economic slowdown in Europe, taking the pressure off the central banks to further raise rates or even to let them fall.

This, of course, is taken as a hopeful sign by those arguing for the stabilizing of the dollar because it would help to change relative interest rates between Europe and the United States, something that has contributed to the weakness in the dollar. Higher short term interest rates in Europe have drawn investors away from the U. S. during the recent period when the Federal Reserve has been dramatically lowering their target for the Fed Funds rate. In addition, the Federal Reserve Open Market Committee, after their latest meeting, announced that their latest reduction in the Fed Funds target may be the last one…at least for a while. This has been taken as a hopeful sign that the yield differential between Europe and the United States will become more favorable to the United States.

Finally, although not noticed at the time, the finance ministers of the G-7 nations called attention to the problems, including that of the dollar, in international currency markets and stated that they could not ignore these going forward. Analysts have now gone back to this and claimed this to be another piece of evidence that the concern over the decline in the value of the dollar has risen on the agenda of world bankers. This, they argue, is just another sign that maybe the decline in the value of the dollar is over and that some rise might be expected in the future.