Experts have described the Russian ruble as the world’s most promising currency. World’s leading banks recommended to snap up Russian rubles, since under the current conditions it is one of the most lucrative investments, Bloomberg said. The recommendations are based on expectations that Russia's new President Dmitry Medvedev will take a course for strengthening the ruble against the world’s currencies. At the same time the dollar is going up against the euro, but it proved to be insufficient to trust in the US currency, but sufficient enough to get disappointed with the European currency. 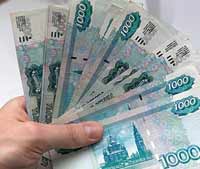 The US investment banks Goldman Sachs, Merrill Lynch and the German giant Deutsche Bank consider that in the next six months the Russian ruble will increased by four percent against the world’s leading currencies. Experts forecast that Dmitry Medvedev’s first decision after the inauguration will be strengthening the ruble, which will help to overcome the galloping inflation. Stronger ruble will cut the income from oil export; however, analysts consider that this will not stop the authorities.

All these expectations made the ruble one of the world’s most promising currencies on the global financial market and one of the most lucrative investments, ITAR-TASS said. Besides, the growing demand itself can strengthen the ruble. On April 24 Alexei Ulyukayev, deputy chairman of the Central Bank, claimed that he does not overrule the possibility of stronger ruble.

“Ruble strengthening will remain the key anti-inflation measure that the Central Bank has at its disposal among its limited instruments,” Ramin Toloui from California’s Pacific Investment Management Co. told Bloomberg. Deutsche Bank’s leading economist in Moscow Yaroslav Lisovolik stated that in Russia it is impossible to lower inflation by controlling the lending rate, since the Russian mortgage market is poorly developed, and consumer credits are confined to big cities.

At the major press conference held in February Putin who is due to head the government on May 8 and thus to take responsibility for the economy stated that “lower inflation is high on our list of priorities.” Since 2003 prices growth exceeds the government’s annual forecasts, and in 2007 it was 1.5 times the forecast, Bloomberg said. According to the Central Bank, propping up the ruble by one percent will reduce inflation by 0.3 percent.

“They [the authorities] should show that they take necessary measures to curb the inflation,” said Vladimir Sokolov, the member of the board of directors of VTB Bank Europe and the former head of the Russian Central Bank’s department of financial transactions. According to him, “it’s necessary to peg the ruble by 20 percent to overcome the inflation.”

Ruble strengthening means that Russian manufacturers will gain less profit from export goods, and 100 dollars a barrel mean a fewer price in Russian rubles. However, oilmen claim that they suffer from the inflation greatly as well.

Russia ’s largest oil company Rosneft has already suffered from the growth of prices and expenses: the equipment became much more expensive, infrastructure costs and salaries went up, said the company’s financial director Peter O’Brian. Since 2000 salaries in dollars have doubled. “Inflation is painful,” he said. “If it goes on, producers of natural resources may no longer remain competitive on the global market.” Besides, the economists polled by Bloomberg forecast that by the end of this year oil prices will decrease from 116 dollars to 90 dollars a barrel.

Thus, it will be quite an undertaking for the Putin government to keep the balance between strengthening the ruble to curb the inflation and evading the damaging aftermath to Russian exporters from these actions, analysts consider.

The US economy has entered the phase of “a very sluggish fall” that may last up to the end of the current year, Alan Greenspan, the former head of the Federal Reserve System, told Bloomberg.

The USA is going thorough the phase of “fall, however, it’s a very sluggish fall, for there is no expected reduction in jobs,” Greenspan underlined.

Simultaneously, he stated that it is too early to say that the credit crunch set off by the US mortgage crisis is over. “It’s impossible to defuse the crisis until prices on the US housing market are stabilized,” Greenspan said.

Moreover, he argued that the global economy had faced inflation again. The inflationary pressure rises, for it is indispensable to add growing salaries of most countries to the highly increased food prices.

Now Greenspan is the leading consultant of the world’s largest financial institutions, including Deutsche Bank.