The two-year long decline of the dollar finally comes to its end, Bloomberg’s enquiry into the international currency market suggests. Some reputable currency traders consider that the last two interest rate cuts in the USA (total 1.25 percent) were enough to stop the downward tendency of the dollar By the end of this year the dollar is supposed to gain about 5.4 percent (by $1.40) against the euro. In 2009, this figure is expected to be on the level of six percent (€ 1 will be worth $1.32). 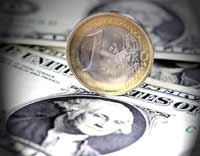 The most unexpected reduction of the interest rate during the last seven years supports the economic growth in the USA, BNP Paribas SA experts believe. The European economy is expected to slow down and to see a 1.6 percent rise in 2008. In the USA, the figure will be 1.9 percent. The Deutsche Bank analysts expect the rise of the DGP in the USA and in the euro zone by 2.6 and 1.9 percent respectively.

It is worthy of note that today such forecasts do not mean mere words, but a guide to action with large sums of money. Robert Robis, a fixed-income manager at Oppenheimer Funds Inc. has reduced the share of euro-denominated assets versus those linked to the dollar in his nine-billion-dollar portfolio. He believes that “the Fed's actions allowed to avoid a long recession, and a recovery is likely to follow later this year”. His optimism is based on real statistics. The specialist expects the US currency to outperform. Futures traders cut the value of contracts benefiting from a drop in the dollar to $13.9 billion as of January 29, according to the Bank of America Corp. That's down from a record $32.3 billion in November.

For the first time since 2003, investors are focused on relative growth prospects rather than absolute borrowing costs, according to Geoffrey Yu, a London-based strategist with UBS AG. Some optimistic analysts predict that the US dynamic actions aimed to create a favourable climate for an economic growth are to contribute to dollar’s rise against the euro. The US interest rate (cost of money, in fact) was decreased by three percent, while in Europe the figure remains four percent. Some days ago when the Fed cut the rate overnight to avoid the forthcoming crisis, the European Central Bank chose to keep its benchmark rate unchanged in an attempt to curb inflation.

Experts compare the present situation with the 2001 crisis when hi-tech firms lost billions. Then due to the Fed’s prompt actions the US interest rate turned out 2.75 percent lower than the ECB’s rate. As a result, in the first six months of 2001 the dollar rose by ten percent against the euro.

Optimistic forecasts look set to come true thanks to conservatism of the ECB’s officials, as it was in 2001. This will be favourable for those involved in the international economy, for the US will get a longed-for momentum to restore an economic growth, while Europe will have the euro weakened, which excessive rise created great problems for the European export-oriented economy.

World
Ukraine's Zaporizhzhia and Kherson regions to hold 'join Russia' votes first
17:26
Russia confirms explosions near military airfield in Crimea
16:54
Russian Foreign Ministry lashes Estonia for its call to ban Russians from Europe
16:05
Explosions in Crimea in the area of military airfield
14:35
Instead of new arms, Washington presents Zelensky with 'black spot'
12:48
Le Figaro: Putin has a time bomb that will trigger major recession in euro zone
12:25
Not too much time is left for Ukrainian economy to collapse
21:31
Ukrainian army about to break down completely
21:08
USA will dump Ukraine for Taiwan
20:14
Putin signs decree enabling Russian banks not to work with foreign currency
18:05
Russia sets up army base in Serbia
РусскийDeutschFrançaisPortuguese