The number of Washington residents living in poverty is up sharply since 2001, with increases in every county except Garfield, according to new figures from the U.S. Census Bureau. 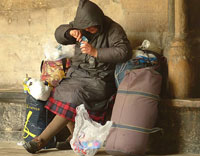 The agency reported this week that 12 percent of the people in the state were living in poverty in 2005, the latest year for which figures are available. In 2001, just 9.9 percent of the state's population was in poverty.

There are three versions of the federal poverty measure: the poverty thresholds (which are the primary version) and the poverty guidelines. The Census Bureau issues the poverty thresholds, which are generally used for statistical purposes—for example, to estimate the number of people in poverty nationwide each year and classify them by type of residence, race, and other social, economic, and demographic characteristics. The Department of Health and Human Services issues the poverty guidelines for administrative purposes—for instance, to determine whether a person or family is eligible for assistance through various federal programs.

Since the 1960s, the United States Government has defined poverty in absolute terms. When the Johnson administration declared "war on poverty" in 1964, it chose an absolute measure. The "absolute poverty line" is the threshold below which families or individuals are considered to be lacking the resources to meet the basic needs for healthy living; having insufficient income to provide the food, shelter and clothing needed to preserve health.

The "Orshansky Poverty Thresholds" form the basis for the current measure of poverty in the U.S. Mollie Orshansky was an economist working for the Social Security Administration (SSA). Her work appeared at an opportune moment. Orshansky's article was published later in the same year that Johnson declared war on poverty. Since her measure was absolute (i.e., did not depend on other events), it made it possible to objectively answer whether the U.S. government was "winning" this war. The newly formed United States Office of Economic Opportunity adopted the lower of the Orshansky poverty thresholds for statistical, planning, and budgetary purposes in May 1965.

The Bureau of the Budget adopted Orshansky's definition for statistical use in all Executive departments in 1965. The measure gave a range of income cutoffs, or thresholds, adjusted for factors such as family size, sex of the family head, number of children under 18 years old, and farm or non-farm residence. The economy food plan (the least costly of four nutritionally adequate food plans designed by the Department of Agriculture) was at the core of this definition of poverty.

Two changes were made to the poverty definition in 1969. Thresholds for non-farm families were tied to annual changes in the Consumer Price Index (CPI) rather than changes in the cost of the economy food plan. Farm thresholds were raised from 70 to 85% of the non-farm levels.

In 1981, further changes were made to the poverty definition. Separate thresholds for "farm" and "female-householder" families were eliminated. The largest family size category became "nine persons or more."

Apart from these changes, the U.S. government's approach to measuring poverty has remained static for the past forty years.