Boeing to deliver Dreamliner in late 2008 as scheduled

Boeing Co., said it's still working through “wrinkles” in the supply chain for its new 787 Dreamliner and promised to deliver the first aircraft in late 2008 as it was scheduled. 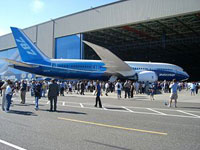 Boeing to deliver Dreamliner in late 2008 as scheduled

The Dreamliner has 762 orders valued at more than $120 billion, making it Boeing's most successful new aircraft in sales, Bloomberg reports.

The Boeing 787 Dreamliner is a mid-sized, wide-body, twin engine jet airliner currently in production by Boeing Commercial Airplanes and scheduled to enter service in November 2008. It will carry between 210 and 330 passengers depending on variant and seating configuration. Boeing has stated that it will be more fuel-efficient than earlier Boeing airliners. It will also be the first major airliner to use composite materials for most of its construction.

Until January 28, 2005, the 787 was known by the developmental designator 7E7. Early released concept images depicted a radical design with highly curved surfaces. On April 26, 2005, a year after the launch of the program, the final look of the external 787 design was frozen, with a less rakish nose and a more conventional tail. Boeing featured its first 787 in a roll out ceremony on July 8, 2007 at its assembly factory in Everett, Washington. The first test flights are not on a fixed schedule but are expected in the second quarter of 2008 after having been planned to start earlier.

KLM also took out options for one additional 737 and two extra 777s.

Boeing said the planes are worth $716 million (483 million EUR) at list prices, though airlines typically negotiate discounts. The order was previously attributed to an unnamed customer.

With its most recent order, KLM has six 777-300ERs on order and is scheduled to take delivery of its first one in the first quarter of next year. KLM's current fleet includes 15 777-200ERs, some of them owned, others leased.