Private employers added 189,000 jobs in November, a report by a private employment service said on Wednesday, much higher than market expectations and the biggest monthly increase in a year. 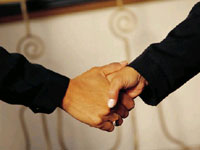 The ADP report suggests Friday's closely watched payrolls report from the government, which includes public and private sector hiring, could be much stronger than expected.

Assuming government payrolls expand by 19,000, which is the average monthly increase over the last 12 months, Macroeconomic Advisers said this implies an estimated 208,000 increase in total non-farm payroll employment.

According to the latest Reuters poll of economists, the U.S. Labor Department on Friday is expected to show 75,000 non-farm jobs were created in November, down from 166,000 the previous month, Reuters reports.

Surprisingly, the ADP data are showing stabilization in both construction and financial sector employment, another reason payroll growth in November could exceed our forecast, as is the surge in service sector employment.

Looking at other labor market indicators, the rise in weekly jobless claims through the fourth week in November suggests the possibility of a greater-than-expected rise in the November payroll figures, though recent levels are still within the historically lean band seen over the last three years if we ignore the Thanksgiving Day surge as a seasonal anomaly. Initial claims are tracking a month-average for November of 338,000 compared with 327,000 in October, 313,000 in September, 324,000 in August, 307,000 in July, 319,000 in June, 306,000 in May, and 327,000 in April, BusinessWeek reports.

ADP began keeping records in January 2001 and started publishing its numbers in 2006. The company says there is a 90 percent correlation between its revised data and the government's monthly private jobs figures.

After some early setbacks, the ADP report is increasingly considered a reliable indicator of the government's figures on payrolls. Earlier this year, ADP said it would change the way it adjusted the figures for seasonal variations in hiring. The sample size nearly doubled to cover almost 400,000 of ADP's customers.

The rise in productivity — and the deceleration in wage growth — means that inflation may be less of a risk, which opens the door for the Fed to cut further.

Activity at businesses outside of manufacturing dipped in November, and businesses appeared to be paying more for their goods, said the Institute for Supply Management, a trade group. Its activity index fell to 54.1 from 55.8 in October; readings above 50 indicate growth, the New York Times reports.