Russia, supplier of a quarter of Europe's gas, signed a pipeline agreement with Italy today that will give the Kremlin more control over the continent's energy market. 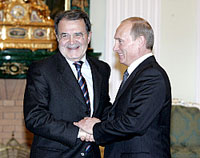 OAO Gazprom, Russia's gas exporter, and Italy's Eni SpA agreed to form the operating company for a 10 billion-euro ($14.8 billion) link from Russia to Europe via the Black Sea. The deal was signed in the Kremlin during Italian Prime Minister Romano Prodi's visit with President Vladimir Putin, Gazprom said in an e-mailed statement.

“We're using this opportunity to get a political blessing,” Eni Chief Executive Officer Paolo Scaroni told reporters. “Pipelines in general, and South Stream in particular, are such a significant infrastructure investment that they raise political attention.”

Gazprom and Eni will each own half of the new company, which will hammer out the technical details of constructing the 900- kilometer (560-mile) South Stream pipeline, Scaroni said. The company will be formed by Jan. 15, 2008, and start deliveries in 2013, Gazprom said in the statement.

South Stream will be Russia's second underwater gas link to the European Union that bypasses Ukraine and Belarus, through which most of Gazprom's exports flow, after the Nord Stream pipeline is built under the Baltic Sea to Germany. The two projects will enable Russia to boost shipments to Europe by more than 50 percent as early as 2013.

Running under the Black Sea to Bulgaria, South Stream will cost “more than 10 billion euros,” Scaroni said. The operator will be registered in Switzerland or the Netherlands. Gazprom and Eni already have Blue Stream, which moves Russian gas across the Black Sea to Turkey. This year Gazprom plans to transport 10 billion cubic meters of gas via Blue Stream, up from 7 billion in 2006, according to the statement.

The operating company may take on more partners depending on which countries the pipeline crosses on its way to western Europe, Scaroni said. In Bulgaria, the pipeline will split into a northern route going to Austria via Romania and Hungary, and a southern route crossing the Balkan peninsula to Italy.

The northern route passes through the same countries as the Nabucco pipeline from Turkey to Austria, which the EU is pushing to reduce dependence on Russia. Both South Stream and Nabucco are designed to carry about 30 billion cubic meters of gas a year, Bloomberg reports.

“I think Europe has room for Nabucco and South Stream,” Scaroni said. “We expect a lot of support from the EU because South Stream is a European project.”

When asked if South Stream and Nabucco could share the northern route, Scaroni said: “Why not? It's not on the agenda, but we're open to cooperation.”

The two countries are "developing a policy of long-term friendship" based on "mutual understanding, cooperation and shared spiritual values," Prodi said.

The Italian premier also signed a document of intent to return ownership of a Russian Orthodox Church in the Adriatic port city of Bari to Russia.

The gesture, announced by Prodi in March, is meant to improve long-strained relations between the Russian Orthodox Church and the Roman Catholic Church.

The church was built in the early 20th century to welcome Russian pilgrims who traveled to Bari to pray near the relics of St. Nicholas of Myra. It became the property of the city of Bari in 1937 as the number of Russian Orthodox pilgrims dwindled following the Russian Revolution, the AP reports.