China’s inflation rate will likely rise 4.5 to 4.6 per cent this year, driven mostly by food price rises, as well as increases in oil, metal and iron ore prices, authorities said. 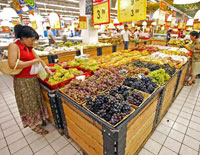 The forecast inflation rate would be the highest since 1996 and is up sharply from last year's 1.5 per cent. But it is "generally moderate and still at an acceptable level," Xie Fuzhan, director of the National Bureau of Statistics, said, according to state media.

“The rapid rise in property and stock prices has also accumulated relatively big risks to the long-term development of the economy," he said.

Excess liquidity, a large portion of which is in the form of speculative funds flowing through the current account into China's stock and real estate markets, is behind the rise in asset and consumer prices, Mr Xie said.

The recent price increases "have corrected the distortion caused by inadequate appreciation of the yuan," Mr Xie said.

But Mr Xie didn't elaborate on whether the government plans to let the yuan rise faster.

The government has been concerned about inflation from higher food and commodities prices spreading to other areas of the economy.

Beijing has asked various government departments to keep prices stable, though it was recently compelled to raise the ex-factory prices of oil products because of the soaring price of crude oil.

Mr Xie was reported as saying monthly increases in the consumer price index compared with year-earlier periods were likely to remain around 6 per cent for some time.

China's inflation rate in October rebounded to match the 11-year high of 6.5 per cent set in August.

Mr Xie said the government ought to maintain a moderately tight macroeconomic policy to gradually slow economic growth to a more reasonable level of around 10 per cent.

He forecast China's gross domestic product will grow around 11.5 per cent this year.

As part of its efforts, China needs to deepen reforms of its exchange rate and interest rate systems, said Mr Xie.
He forecast China's gross domestic product will likely maintain an average annual growth rate of 7 to 8 per cent or even higher for more than a decade, the Australian reports.

The median estimate of 12 economists surveyed by Bloomberg News compares with the 1.6 percent gain in September and would be the highest level since August 1998. The Census and Statistics Department will release the figure at 4.15 p.m.

Rising stock and property markets and falling borrowing costs are fueling spending, while the Hong Kong dollar's 5 percent fall versus China's yuan this year has pushed up import prices. The government restrained inflation from April to September by waiving the tax.

“Hong Kong's inflation will creep higher without the waiver,” said Henry Li, an analyst at Core Pacific-Yamaichi International (Hong Kong) Ltd. “Stock market gains have spilled over into property, with lower interest rates helping to push up rents and prices.”

The benchmark Hang Seng Index of shares has climbed 33 percent this year even after yesterday's 4.2 percent slide. The property sub-index has jumped 45 percent.

HSBC Holdings Plc, Standard Chartered Bank Plc, Bank of East Asia Ltd. and other lenders cut interest rates in September and this month. Changes in borrowing costs track moves by the U.S. Federal Reserve because Hong Kong's currency is pegged to the US dollar, Bloomberg reports.